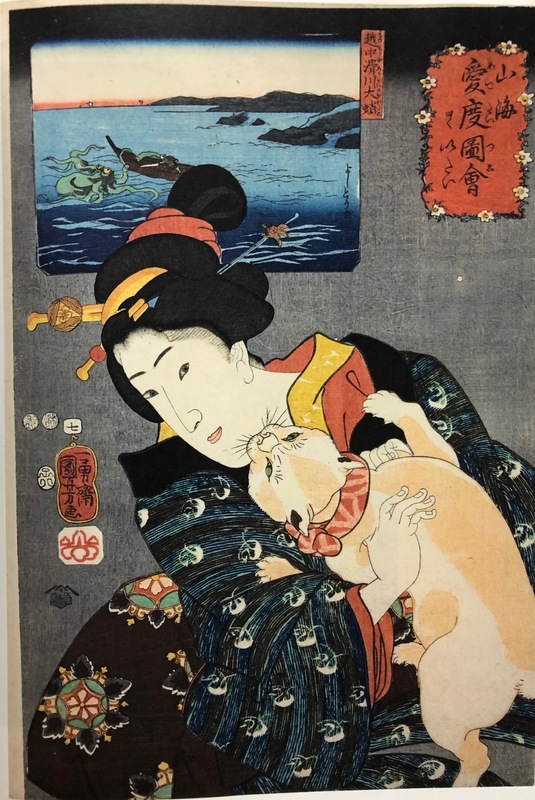 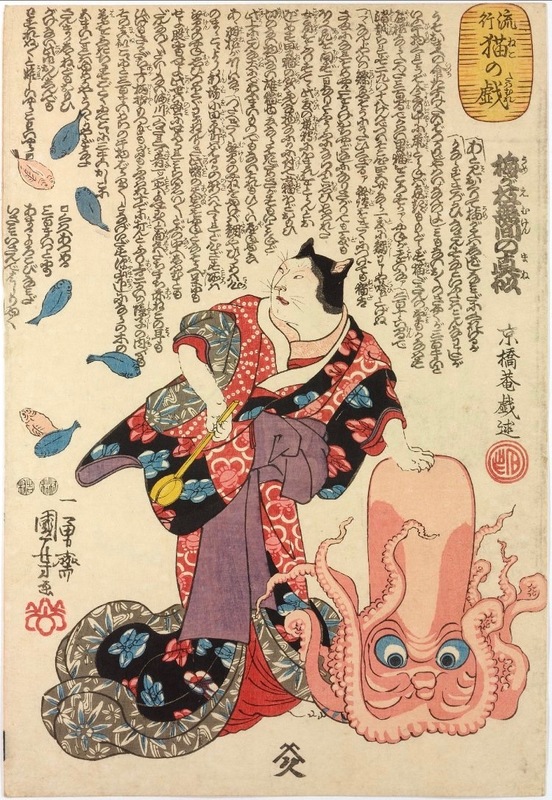 Domesticated cats first appeared in Nihon ryōiki, the oldest collection of anecdotal tales about the spread of Buddhist ideas in Japan.[1] The Tale of Gengi remains the most influential mention of a cat in literature from the eleventh century. In it, Kara Neko, or, Chinese Cat, runs out of a room and pulls up a blind in the room of a princess. Outside, a young courtier falls in love after catching a glimpse of her, marking the beginning of a tragic love story.[2] There are several genres of ukiyo-e cat prints. Common depictions are cats and people, cats as people, cats and play, and cats versus people.

Kuniyoshi’s Ouch! That Hurts! Depicts a pet cat clawing excitedly at a woman. This print belongs to Kuniyoshi’s series Auspicious Pictures of Land and Sea, which features half-length portraits of women from varying social classes, paired with pictures of well-known regional locations and products.[3] The inset pictures within the prints were designed by Kuniyoshi’s daughters, Tori and Yoshi, who were thirteen and ten when the prints were first published. The inset picture in Ouch! That Hurts! Is of a large octopus being hunted in the Nameri river in Etchū province, although it is not clear as to why this inset image was paired with the image of the woman with the cat.  This is an example of cats and people.

Kabuki Actor One Kikugorō III as the Spirit of the Cat Stone is an example of cats versus people and cats transformed. The scene depicted comes from the Kabuki play Ume no haru gojūsan-tsugi (Plum Spring: The Fifty-three stations), where the great actor One Kikugorō III is shown playing the Spirit of the Cat Stone. Dressed as an elderly woman, he wears twelve layers of clothing, cat ears, and cat paws. Neko-ishi no Kai conjured up the terrifying image of a monster cat, whose huge face is seen in the print. After attempting to subdue the cat spirit and pulling the red screen back, only an old woman is there. The image of the cat within the oil lamp is a famous moment in the theatrical presentation.[4]

To creatively dodge censorship laws surrounding Kabuki performances, Kuniyoshi often depicted the actors as cats. Aside from avoiding censorship charges, “by using cats as surrogates for people singing, dancing, and acting, the uniqueness of some of these human actions is exaggerated and frequently comical, increasing popular appeal.”[5] Cat Impersonating a scene from Kabuki is one such example. Here, a female Kabuki character has struck an octopus with a wooden scoop, watching with satisfaction, as a cascade of dried mackerel falls down the left side of the print. The origins from this image come from a famous bell called Make no kane (Limitless Bell). Upon striking it, it supposedly brought boundless riches in this life, and limitless hell in the next. Kuniyoshi and the author Santō Kyōzan (1769-1858) were both cat lovers, and they collaborated to make a novel in gōkan format. In it, Kabuki actors were impersonated by cats. Named Oborozuki Neko no sōshi (Hazy Moon Cat Tales), it was issued in seven parts between the years 1841 and 1849. There was a brief halt in production due to the Tenpō reforms, but was regardless, a best seller. The title cartouche in the upper right hand side is shaped like a gold coin, alluding to the popular phrase Neko ni Koran (gold coin for a cat).

Kuniyoshi was considered an innovative and creative ukiyo-e genius, whose love for cats inspired him to adapt to the changing political and social climate in the Edo period. The prints discussed previously demonstrate his imaginative work. The choice of a feline is, however, poignant. Considered the protectors of Buddhism, cats were widely respected by Japanese artists and the public. This exhibition is simply a small taste of Edo period ukiyo-e cat prints. There are countless others by Kuniyoshi that are adorable, terrifying, and satyrical.